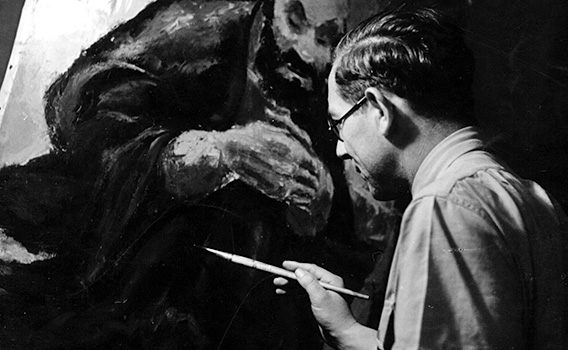 Jacob Pins (initially Otto Pins) was born in Hoexter, Germany in 1917. In 1927, after elementary school, he attended the Koenig Wilhelm Real Gymnasium (high school) until September 1933 when, because of the ever-increasing restrictions imposed on the Jews by the Nazi regime he left school to attend a training camp to prepare himself for emigration to Palestine. 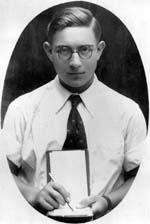 Jacob Pins in 1935 before his departure to Palestine

In a letter he later wrote: “In the fall of 1933, I left high school when it became obvious that I had no future there. Of course, by leaving Hoexter early in 1935 for Stettin to prepare myself physically and practically for life in Palestine, I saved myself from something much worse. I returned to Hoexter briefly in August 1936 in order to pack and to say good-bye to my parents and friends. Of course I didn’t know at that time that this would be the final good-bye. We had planned that they would follow me as soon as possible. Sadly, this did not happen and before my parents were able to overcome the financial, political, and bureaucratic hurdles and obstructions, WW II broke out and the trap was closed. In December 1941, along with the rest of Hoexter’s Jews, they were transported to the ghetto in Riga, Latvia, where they were murdered in July 1944.”

A later letter provides information about the difficulties of his early experiences in Palestine: “In August 1936, I emigrated to Palestine where I lived in a Kibbutz until 1941. We had an extremely difficult time. We did not own our own land and existed as day laborers hired out to citrus orchards. It was seasonal work, mainly during the winter harvest while summer brought unemployment. The economic situation worsened when WW II broke out and we were unable to export oranges to Europe. We didn’t have enough to eat and actually suffered from hunger — and almost more from unemployment… Finally, in 1941, we gave up and closed the Kibbutz — a very unusual occurrence.”

In this hopeless situation and additionally handicapped by polio which he contracted in 1939, Jacob Pins had the courage to give his life a new direction. “Against the advice of my friends and acquaintances, I decided to pursue an old dream to study art. I had left the Kibbutz without any possessions of any kind. After five years my clothes were in rags to a point where I could hardly let myself be seen. Thanks only to my in-born stubbornness, I did not give up and, after endless efforts managed to get a tiny grant in order to study with [the German expressionist] Jakob Steinhardt in Jerusalem. It was an extremely tiny grant. I was forced to live in such dire circumstances that, in my mind, the proverbial starving artist seemed to live in luxury. Nevertheless, despite all, I managed to exhibit my woodcuts in a small gallery in Tel Aviv in 1945. Surprisingly, it was a great success, and when the museum bought one of my woodcuts, I was on the way and subsequently exhibited annually.” 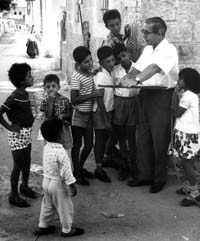 Surrounded by children on the street: Jacob Pins in the early 1980s drawing sketches

Six decades have passed since and the artist Jacob Pins has since gained worldwide recognition. He was one of the founders of the Jerusalem Art Society in 1949. In 1952 he illustrated the Hebrew edition of Kleist’s “Michael Kohlhaas”. Then came numerous showings in North and South America as well as Australia and Europe. He was the recipient of the Ohara Prize at the Biennale for Graphic Arts in Tokyo in 1957 as well as the Jerusalem Prize in 1961. Since 1956, he has taught at the Bezalel Academy for Art and Design in Jerusalem which awarded him a professorship in 1978. Additionally, he became known as an expert of East Asian art. In 1945 he acquired his first multi-colored Japanese woodcut which became the foundation of his great collection of Japanese pillar prints which culminated in the extensive handbook “The Japanese Pillar Print” published in 1982. 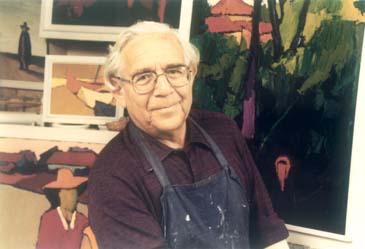 Jacob Pins in his atelier around 1988

Despite his unhappy experiences and despite the murder of his parents by the Nazi regime, Jacob Pins renewed his ties to his native town Hoexter. He came for a brief visit first in 1957 and then for a second time in 1967 to attend an exhibition of his woodcuts at the Henze art gallery. There were more visits in the 1980s during which close friendships were formed as well as visits to Israel by his new friends. It was an especially shattering moment for Jacob Pins when, while on a brief visit in Hoexter in November 1988 he attended an exhibition of “Jews in Hoexter”, he suddenly noticed a photo of east-Westphalian Jews at the Bielefeld railroad station being loaded on a train to the Riga ghetto. “That’s my father … when I saw this at the exhibit I was moved beyond description. I can’t tell you how much.”

More visits and exhibitions in Hoexter followed. In 1989, there was large retrospective in Corvey. There was a small exhibition of his woodcuts at city hall in 1995. The town of Hoexter honored him at an official reception during which he entered his name in the Golden Book of the town. In 2002 he presented the town of Hoexter with a large part of his work, a small part of which was exhibited at the local bank. On September 15, 2003, upon the recommendation of the newly formed “Jacob Pins Society”, the town of Hoexter made him an honorary citizen.

It was Jacob Pins’ last visit to Hoexter. Instead more and more of his work arrived in his native town. The collection of woodcuts, water-colors, sketches, oil paintings, and prints has grown to more than 800 items – a basis for numerous exhibits in Hoexter and neighboring communities of Detmold, Warburg and Dringenberg.

During a visit of his friends from Hoexter in Jerusalem in October 2005, Jacob Pins expressed his wish to visit Hoexter again. It was not to be. He passed away on December 4, 2005 at the age of 88.

Since April 2008 the Forum Jacob Pins situated in the Adelshof Heisterman von Ziehlberg building offers an adequate place for the works of this Hoexter born artist.