Translation with Google, the captions can only be found in the German version.

Although the Frohsinn family is apparently one of the very old, long-established families in the local area, little is known about their living conditions and professions, and sometimes only the dates of their lives are known. As early as the first third of the 18th century, members of the family lived in Bruchhausen, and later descendants can be found primarily in Ovenhausen, Höxter, Brakel and in the USA.

The birth of a Jütte Frohsinn in Bruchhausen, who obviously had two brothers, is documented as early as 1735. All that is known about her brother Itzig is that his daughter Brendel was married to Feibelmann Gumpert Netheim (* 1770) from Ottberg. This Brendel became the progenitor of the Netheim family (see here).

Leffmann Frohsinn, Jütte’s other brother, lived with his wife Bela (* 1741), who came from Bösingfeld, in Bruchhausen, where their four children were born. The later bearers of the name Frohsinn go back to him and his sons Soistmann and Jonas. 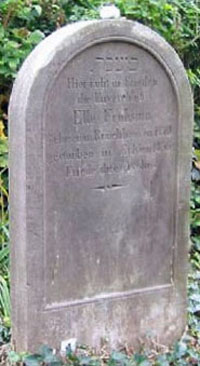 Leffmann Frohsinn’s two sons stayed in Bruchhausen. Soistmann (1766–1836), the elder, had five children with his wife Brendel Katz (1774–1835), who came from Ovenhausen, one of whom died young. Her eldest daughter Zipora (1802–1842) married Samuel Udewald (1798–1878) from Beverung and had five children with him, whose fate is not examined here. Zipora died a week after the birth of the youngest child, whereupon her husband married her younger sister Johanna Frohsinn (* 1810).

Soistmann’s son Salomon Frohsinn (1813–1874) stayed in Bruchhausen until his death and was the last Jew in the village after all the other members of the family had left. In 1838 he married Rike Katz (1805–1869) from Ovenhausen. Of the four children, the son Soistmann (* 1839) died young, while his brother Samuel (* 1849) remained unmarried. The inscription on his tombstone reads: “Here rests in peace Samuel Frohsinn / His life on earth was not much / His goal was heavenly enjoyment.”

The identity of Salomon’s daughter Jütte, (* 1840) has not been clarified, and she may be identical to the somewhat older relative Henriette (* 1835), who emigrated to Philadelphia in the USA in 1872 (see below). In any case, her sister Elisabeth Karoline (Betti) (* 1845) married the Protestant Bruchhausen farmer Carl Heinrich Wendt (* 1847) and also became a Protestant. Descendants still live in Bruchhausen and Ottbergen.

Isaak Frohsinn (✡ 1849), Soistmann’s other son, was probably born around 1810. In 1843 he married Edel Katz (1811–1881) from Ovenhausen, a daughter of the butcher Levi Katz. Until 1855 the house housed the prayer room rented by the Jewish community for 5 TL. The couple had four children. However, Isaac died before his youngest son was born, and his widow then married Jonas Eichholz (1828–1899) from Völsen.

The son Isaak (1850–1896), named after his father, married Therese Udewald (* 1857) from Beverungen and moved to Höxter between 1880 and 1885, where they had five children, of whom the daughter Frieda (1886–1896) died at the age of nine and was buried in the cemetery in Höxter, as was her father a little later. His wife apparently moved from Höxter and probably lived in Elberfeld. 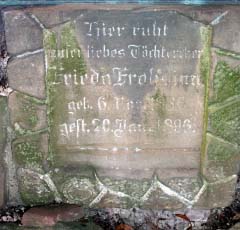 While no information is available about Isaak and Therese Frohsinn’s daughter Grete (* 1890), the other three children fell victim to the Holocaust. The unmarried daughter Ella (* 1885), who probably lived in Peine, later moved in with her brother Leopold, who now lives in Bielefeld-Schildesche. She was deported to Auschwitz on March 2, 1943 and murdered. 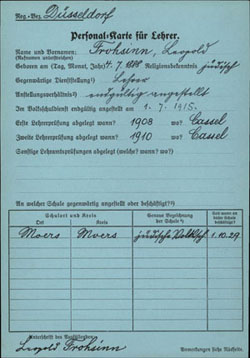 Her brother Leopold Frohsinn (* 1888) was a teacher. In 1908 and 1910 he completed his training at the Israelite Teachers’ College in Kassel with the teacher’s examination and then worked in Essen. In 1924 he went to the USA to study languages ​​for a year and then returned to Essen. In 1929 he went to the Jewish school in Moers, where he translated the memor book there into German. His daughter Doris was born in 1929 from his marriage to Änne Hoffmann (* 1897), who was born in Gelsenkirchen.

In the Third Reich, school work became increasingly difficult. In 1938, for example, the mayor rejected Frohsinn’s application for a school blackboard from the city’s inventory for “principal considerations”. When he was “taken into protective custody” after the pogrom night from November 11th to 18th, 1938, the mayor cynically asked him to explain why classes had been cancelled.

In July 1939, Frohsinn was forced into retirement and then went to the Jewish elementary school in Bielefeld, where the family apparently lived in Schildesche. From there he was deported with his wife and daughter to Warsaw on March 31, 1942 and then to Auschwitz and murdered.

Leopold Frohsinn’s youngest sister Sophie (* 1893) also fell victim to the Holocaust. She had been married to Markus Landesmann (* 1889) from Tycsin (Galicia) and lived in Siegen since 1926, and they had two children there. The son Kurt (* 1928) attended the Israelite Horticultural School in Hanover-Ahlem from 1937 and was deported from there to Riga on December 15, 1941. He’s lost there. The parents were deported to Poland with their eleven-month-old daughter Ruth (* 1938) at the end of 1938 and from there a good three years later deported via the Lodz ghetto to the Chełmno extermination camp (Kulmhof) and murdered on February 10, 1942. 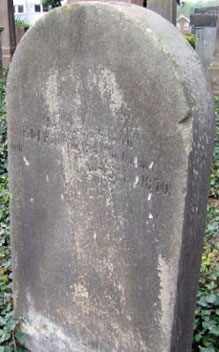 Jonas Frohsinn and his descendants

Jonas (1768–1845), the second son of Leffmann Frohsinn, stayed with his wife Edel (Adelheid) Nussbaum (1785–1870), who was born in Salzkotten, in Bruchhausen, where their eleven children were born, but later moved with them family to Brakel. Many of his descendants later lived in the United States.

There are slight uncertainties in the identification of Jonas Frohsinn’s son Levy (1811–1887). But he is certainly identical to the 38-year-old Lefmann Frohsinn, who ran a dye works in Bruchhausen and had the children Philopena (Bienchen, Pina) (1832–1894), * Henrietta* (1835–1895) and Salomon (ca. 1838–1895). However, Leffmann’s first wife died, and his second wife Rebecca, about whom nothing further is known, apparently died soon as well.

It was probably against this background that Leffmann Frohsinn submitted an application to move to Steinheim in 1850 in the hope of “being able to run a business more profitably in the city.” However, that probably didn’t work out, and so he moved to Vörden in 1851 for four years. from where the daughter Philopena (Bienchen) emigrated to the USA in 1854 and was later married in Philadelphia to Meyer Stern (1842–1909), who also came from Germany.

In 1855 her father Leffmann also emigrated to America, but in doing so he made himself four years younger, as he did in later years. He lived there, now under the name Louis, in Philadelphia for the following decades. He married his third wife Helena (ca. 1835 – 1899) from the Neustadt family in Amelunxen. The two had the children Jonas (* ca. 1865), Amanda (1867-1944) and Samuel (1870-1910), whose descendants still live in the USA today. 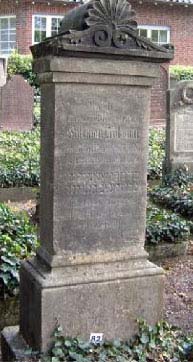 Jonas Frohsinn’s son Salomon (1814–1895) also left Bruchhausen and lived with his wife Julie Levison (1825–1910), who was born in Bückeburg, in Brakel, where their seven children were also born. The son Salomon probably died as an infant, and the daughter Bertha (1861–1929) later lived unmarried in Brakel. The son Levi, born around 1860, married Rosa Stern (* 1876) from Rhoden (Hessen) and lived with her in Brakel, where he presumably also died. After his death, his wife apparently moved to Wrexen, near her birthplace, where relatives probably lived, and was deported in the Third Reich on September 7, 1942 via Kassel to Theresienstadt and then on September 29, 1942 to Treblinka to be murdered. Her son Julius (1906–1980), on the other hand, managed to flee to the USA in good time in 1938 with his wife Mary Bierhoff (* 1917), who came from Bonenburg. 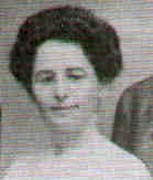 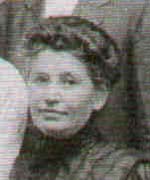 The emigration of Julius Frohsinn and his wife to the USA was certainly made easier by the fact that numerous members of the Frohsinn family had been living there since the 19th century, because three of the seven siblings of his father Levi had gone to America between 1875 and 1890, * Jonas, Abraham* and Isaak, and in 1890 and 1894 their unmarried sisters Cecelia (Zelli) (1867–1949) and Ida (1857–1938) also moved to Philadelphia in the USA. After the death of her cousin Philopena, the latter was the second wife of the aforementioned Meyer Stern (see above).

Abraham Frohsinn (1864–1942) went to the USA in 1877 at the age of 13, where he first married his cousin Philopena in Philadelphia. Stern and her family lived in Philadelphia (see above). There he was also later the owner of a spirits wholesale business with Israel Siedenbach, which he continued to run alone from 1904. In 1896 he married Philadelphia-born Julia Eichholz (1869–1930) from a German family and they had their daughter Margarita Julia (* 1896). The prohibition in force in the USA from 1920 brought Abraham Frohsin’s liquor trade to a standstill, and all that is known of the later years is that he came to visit Germany in 1935 and 1939. 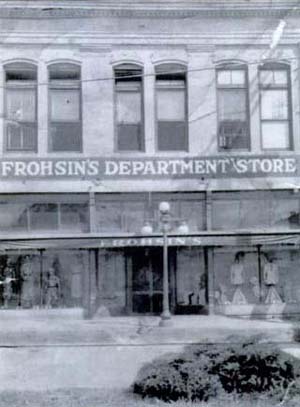 Isaak (“Ike”) Frohsinn (1865–1922) emigrated to the USA as a clerk in 1883 and went to Alexander City (Alabama). In 1891 he bought the Herzfeld brothers’ business there, of which he had already acquired half, and continued to run it under the name Frohsin’s Department Store. In addition to hats, work and button-up shoes, corsets, underwear and bedding, furniture was also sold there. In 1897 he married Emma Hagedorn (1865–1946) from Giershagen (Marsberg), and from 1898 to 1906 the four children Clara, Lene, Ralph and Lewis were born in Alexander City (Alabama), who today continued to run the business under the same name after the death of their father. Director is now Isaac’s grandson Ralph Frohsin Jr.