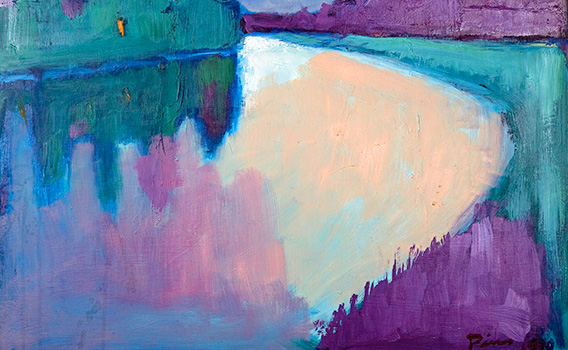 Signs of Reconciliation – an Obituary

Jerusalem/Hoexter. He himself felt that his life was approaching its end. During a moving telephone conversation two weeks ago with Dr. Dieter Schuler, chairman of the Jacob Pins Society, Jacob Pins bade farewell to his friends in Hoexter. On Saturday evening the 88-year old artist died in his home on Ethiopia Street.

Although the news was to be expected it brought sorrow to all who knew Jacob Pins but also thanks to have met this extraordinary human being.

“How can someone who, as a Jew, experienced so much misery here, be capable of such a gesture to donate a large part of his art to his birthplace?” This question was raised by Dieter Schuler on the occasion on September 19th, 2003 when the city of Hoexter awarded Jacob Pins honorary citizenship. In his search for an answer, he described the painful path that took Jacob Pins from Hoexter to Hoexter.

Born in 1917, Jacob Pins, who at that time still went by the first name of Otto, experienced a relatively trouble-free childhood in Hoexter. As the National Socialists came to power, anti-Semitism became increasingly more aggressive and humiliating. The danger became clear to the Pins family. They made it possible for their two sons to leave the country. The parents themselves were unable to emigrate in time. They were deported and murdered in Riga, Latvia.

In 1959, in search for his lost youth and the first time since his emigration, Jacob Pins returned to Hoexter. The view from his train window brought disappointment and the feeling that there was nothing for him. Yet, he came back and to exhibit: paintings in strong colors, stark, expression-filled wood cuts, art work which had already been viewed in London, Amsterdam, Rio de Janeiro, Melbourne, and many other cities throughout the world.

His visits to Hoexter became more frequent and personal relationships developed. How much he took these relationships to heart was revealed in 2002 when he first discussed the purpose of his gift to a circle of private friends and then to the mayor. He dedicated it to the memory of his parents, Dr. Leo and Ida Pins as well as to the other Jews of Hoexter.

With the news of his generous gift, Jacob Pins created not only surprise and joy, but also the impetus to future activities. The Jacob Pins Society was created, the restoration of the patrician Heisterman von Zielberg House began. There, with the newly created Jacob Pins Forum, the wealth of his work left by the artist to the city of his birth will find a dignified and permanent home.

In a room of the art-treasure-filled house in Jerusalem where Elsa Pins took care of the artist up to his peaceful end, hangs an oil painting “The River Weser” which could be viewed at an exhibit in Jerusalem in the year 2000. The catalogue describes it:

“The tension which he had experienced earlier, has been overcome and he made his peace with Germany. His pictorial presentation of the river demonstrates a softening of the tension and he created green, purple, and cream-colored tones in order to create a pastel-like and opalescent effect. With just one color accent, an orange-colored light in the woods of distant hills, he tried to indicate that this empty and quiet area is actually populated. It arouses a feeling of peacefulness – a perfect symbol or that which the artist Pins wishes to create.”